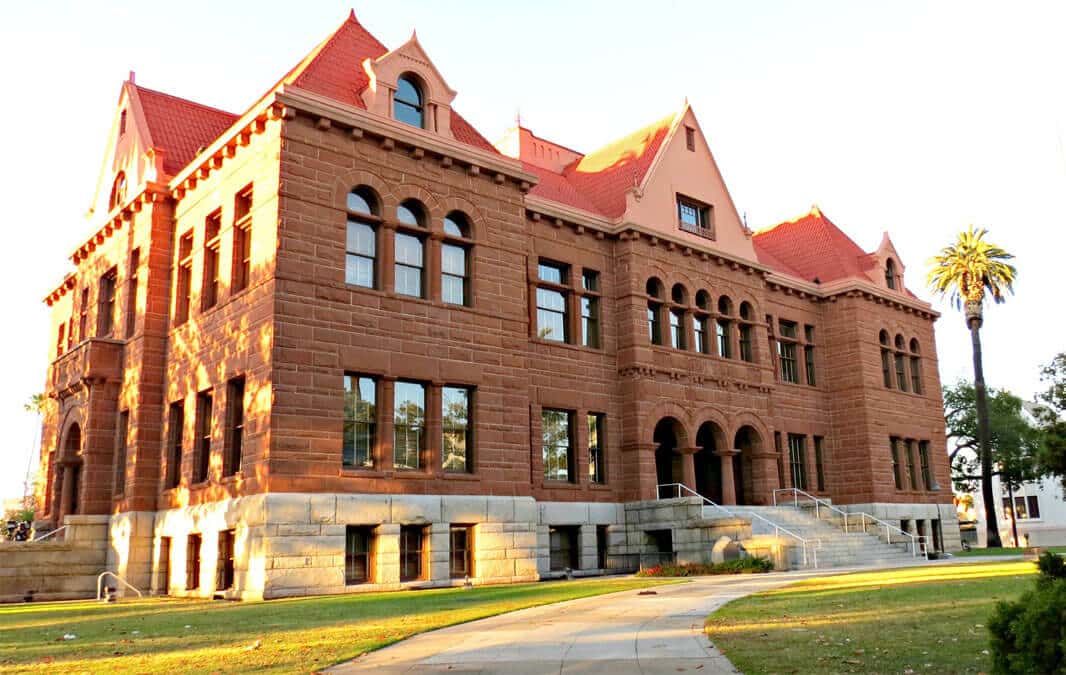 Going to court isn’t something most people look forward to. However, when it comes to the Old Orange County Courthouse in Santa Ana, California, the experience is less legal and more informational, and movie-lovers may enjoy it more than they think thanks to the building’s vibrant 120-year-old history.

If you’re looking for a unique, movie-buff experience in Santa Ana, California, the Old Orange County Courthouse may be just the stop for you. Here’s some beginner information to get you started on this historic site.

Orange County was founded in 1889; four years later, the board of supervisors purchased a plot of land from the county’s founder, William Spurgeon, for $8,000, with the condition that a courthouse be built on it within 10 years. During that time, multiple designs were submitted after a call went out to architects, including a triangular building topped with a spire that was more than 100 feet tall.

Ultimately, a Richardsonian Romanesque design by architect and Los Angeles building supervisor Charles Lincoln Strange was selected, and Chris McNeill (also known for building Balboa Pavilion) was commissioned to build the two-and-a-half-story structure using Arizona sandstone provided by a Santa Ana supplier and granite out of Temecula starting in 1900.

Construction on the Old Orange County Courthouse lasted 17 months and cost $117,000. County offices were ordered to move in by October of 1901, and the building’s dedication took place in November that same year. The courthouse was home to not only every county office but also the county’s only superior court for just over 20 years before an expansion was needed to house the growing government. A hall of records was built on the north end of the lot in 1923, and in 1925, a new jail was added to the east side. A failed hotel on the west side of the courthouse was also purchased in 1930 and converted into additional offices.

A new county courthouse was built in 1968, leaving many wondering what would become of the existing structure. Despite being added to the National Register of Historic Places in 1977, it was deemed seismically unsafe and closed in 1979. However, during the 1980s, work was done to retrofit and restore it, and it reopened as a county historic park in 1987.

In the years following its restoration, the Old Orange County Courthouse has been used as the backdrop in both television and movies. Sections of the building can be seen in such films as Catch Me If You Can and Legally Blonde. Most recently, it has been featured as the main set in the second season of the FX anthology series American Horror Story.

That doesn’t mean you have to be a Hollywood elite to get inside. Along with being featured in Hollywood blockbusters, it also hosts both rotating and permanent exhibition galleries highlighting local history and has become a popular wedding venue.

Whether you’re a fan of architecture, California history, or behind-the-scenes film production, the Old Orange County Courthouse makes for a unique afternoon. Give it a visit and check it off your list of things to do and see in the area. And if that list includes becoming a permanent resident of the Santa Ana, California, area, Villa del Sol Apartment Homes can help. Contact us today for more information!